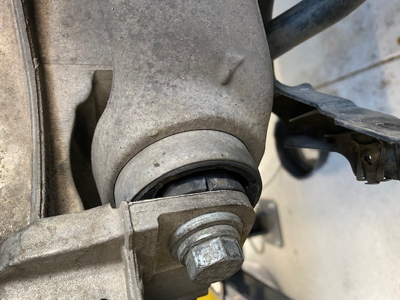 Thrust arm (front control arm) bushing is a common failure on F10 BMW xDrive cars but luckily BMW made the thrust arm replacement a straightforward process.  The thrust arm bushing can be replaced without replacing the entire thrust arm as long as the ball joint is in good condition.  I elected to replace the entire arm so I wouldn't have to deal with pressing out and pressing in the bushing.

2.  There is not enough clearance to remove the thrust arm without moving the axle shaft slightly out of the way.  Insert a socket extension into one of the lug bolts to prevent the hub from spinning and remove the axle shaft bolt.